On Friday, March 20, 2020, a 9-1-1 Telecommunicator (TC) with the Lake County Sheriff's Office in Illinois, tested positive for COVID-19, more commonly known as coronavirus.  We will guide you through the course of action that was taken in hopes that you may find it useful in preparation for any situation that requires the emergency evacuation of your PSAP (Public Safety Answering Point, or 9-1-1 call center).  To maintain the respect and privacy of that first responder, gender neutral pronouns will be used in place of names.

Roughly 12 days prior to the positive result, they began feeling ill, and sought medical advice at an urgent care facility where a doctor treated them for a sinus infection.  They were given a prescription for antibiotics and a return-to-work note allowing them to return after 48 hours without a fever.

Fever free for two days, though still not fully recovered, they believed to be outside the window of any contagion and returned to work Wednesday, March 18.  Their condition did not improve, so they made an appointment with their primary physician whom they saw after work Thursday afternoon.  They contacted Communications Director, Kent McKenzie, later that evening to advise the doctor was doing a COVID-19 test out of caution, as a low-grade fever had returned.  Pending test results, they took additional time off work to self-isolate.

Friday morning at 11:38 AM, McKenzie received a call from them advising of a positive result.  Following that phone call, McKenzie contacted his immediate supervisor, Deputy Chief Chris Thompson, followed by the Health Department (HD) for guidance, and then discussed the situation with Undersheriff, Larry Oliver.

DC Thompson contacted our Facilities Dept to arrange for the PSAP to be decontaminated; however, they did not have the resources to immediately handle such a unique request.  While other arrangements were being made, McKenzie reached out to a Communicable Disease Nurse from the HD around noon.  Initially, they wanted the test results before offering any official guidance, as there were already reports elsewhere of people faking positive results for time off work, triggering unnecessary evacuations.

Concerned about delays, information on the first responder's doctor was provided to help fast track direction from the HD. Shortly thereafter, McKenzie received a phone call from the HD Emergency Manager.  Once they were comfortable that it wasn't a hoax, they provided a set of precautionary guidelines for all TC's to follow, such as:

An email supplemented these guidelines.

Undersheriff Oliver contacted McKenzie a short time later ordering the shutdown and evacuation of the PSAP for disinfecting.  This was over and above the HD recommendation, and McKenzie reached out to a personal contact who advised they could be there to perform the service later that same afternoon.  POINT OF CLARIFICATION: The HD's request for confirmation did not slow down this process, as they did not order or recommend the evacuation. It's imperative that the HD has accurate information to be able to respond appropriately. With the wealth of misinformation available to us, it's important the HD responds in the interest of the public while also keeping their trust.

Now came the task of deciding where to send our afternoon shift TC's, whose shift runs from 2:30P - 11:00P.  Because the infected first responder had already missed so many days previously, there were some other TC's who were never exposed as they were on their scheduled days off.  It was decided they needed to be separated from everyone else. They will be referred to as Group A.

McKenzie reached out to Lisa Berger, Director at CenCom E-911 in Round Lake Beach.  After approval from her board, Group A was to report for duty at CenCom.  That email confirmation was received at 1:27 PM.  While awaiting approval, McKenzie brainstormed with his team on where to send those that had been exposed, Group B.  The easiest and most convenient solution was our Mobile Command Center (MCC), which was immediately relocated to our PSAP parking lot. 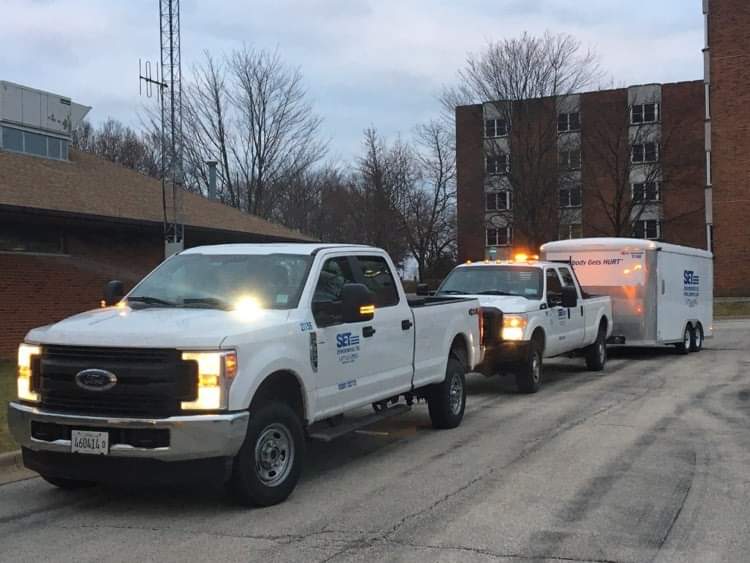 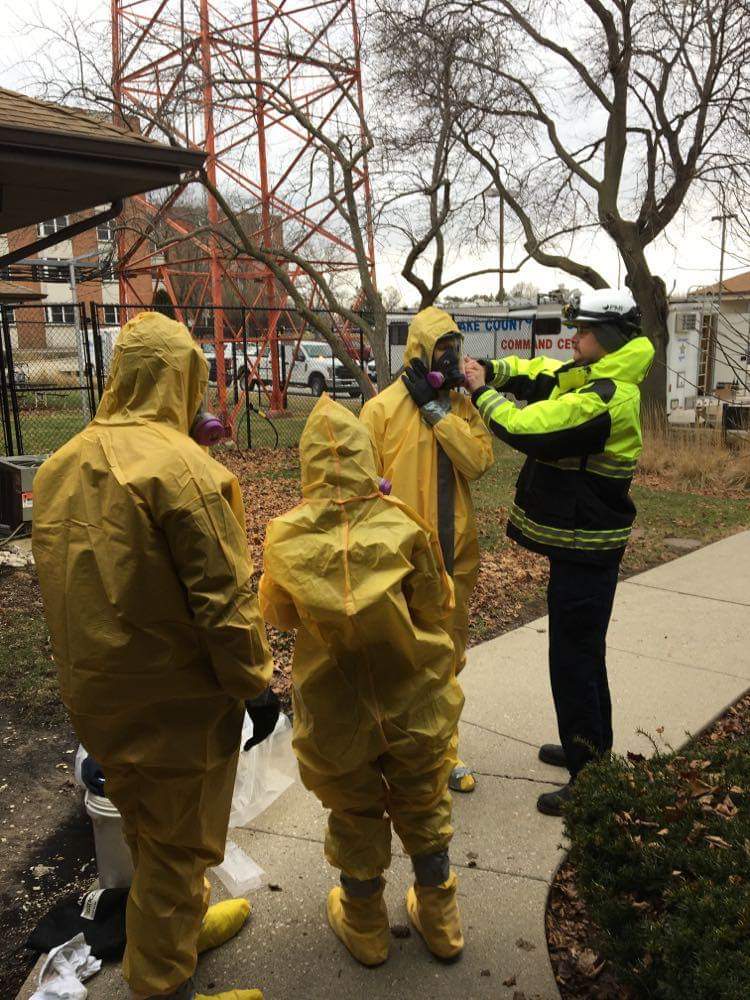 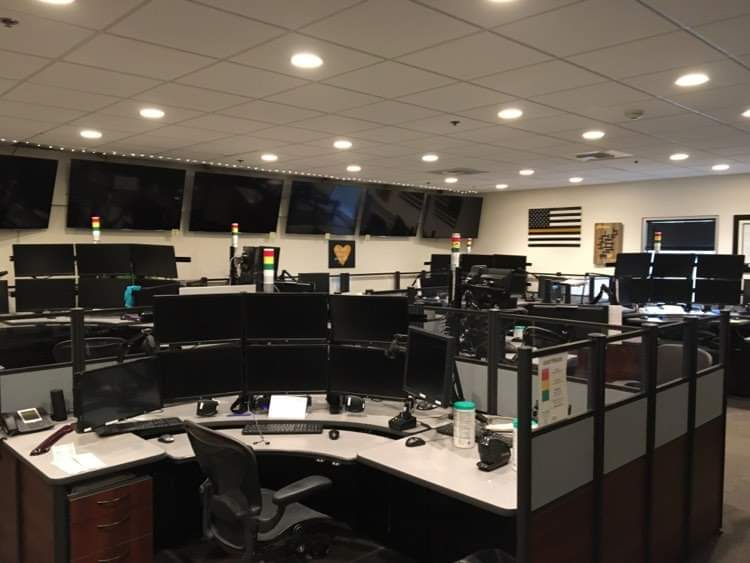 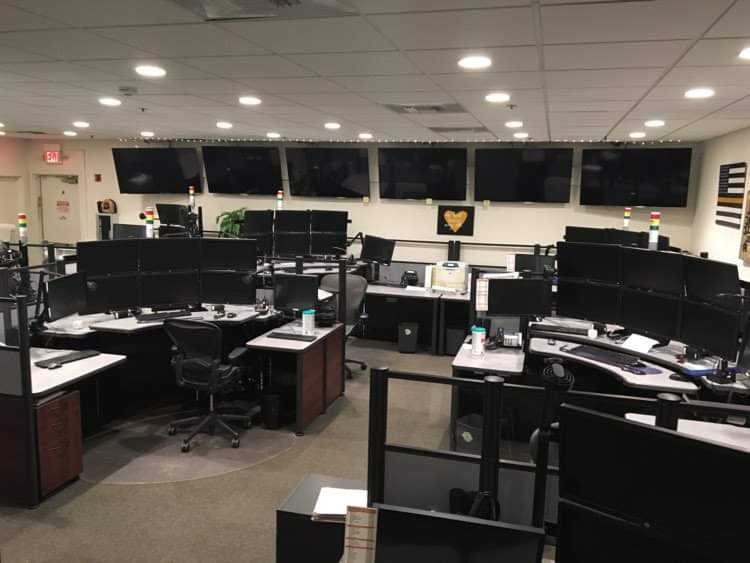 Phone calls with relocation instructions began going out around 1:45P.  Those in Group A were to wait in their vehicles until I.T. arrived.  In addition to equipment and supplies, they were also bringing masks - which were required before TC's could go inside.  This was at the request of the HD, even though Group A didn't have exposure, and I'm sure made our host agency feel a little more at ease.   We contracted with SET Environmental, Inc. for clean-up.  The first of their trucks arrived around 2:00P, followed by Group B reporting for duty shortly thereafter. Before work could begin, our backup centers needed to be fully operational.  Dayshift (6:30A - 3:00P) remained on duty inside the center until that happened.  Director McKenzie and some of his team assisted I.T. in getting the equipment to the MCC, and ran the necessary network cable to it as well.   I.T. arrived to CenCom at around 3:30.  After setup and a few hiccups, Group A was live shortly after 5:00P.  Group B was live about 20 minutes later.  At that point dayshift was able to leave and cleanup could begin.  Decontamination required all equipment to be shut down and unplugged, which McKenzie handled while SET unloaded and geared up.  They used what's called an Ultra Low Volume Spray Fogger that produces a superfine mist of sodium hypochlorite solution - a concentrated bleach.  Waste Management was contracted to handle the disposal of the materials used in the process. While it only took a few hours for SET to complete the decontamination process, with the lingering smell of bleach and the potential side effects from it, McKenzie felt it was necessary to keep the center closed overnight for aeration.  Our midnight shift (10:30P - 7:00A) continued operations at the backup centers, and McKenzie slept on a cot in an office adjacent to the PSAP so he could facilitate the reopening of the center in time for dayshift's arrival.

Life in the Center Afterwards

Steps to mitigate exposure and keep the room as sterile as possible began eight days prior to this incident.  An email was sent on March 12 outlining a number of "chores" to be completed on each shift, preferably at the halfway mark - with a reminder email sent on March 18.  Additional rules mentioned previously, including the wearing of masks and logging temperatures 2-3 times a shift, were introduced afterwards; however, as of now, they are only required for the 14-day incubation period.  This is obviously a very fluid situation, so anything can change.

The biggest problem, of course, is recontamination.  If another TC tests positive, this process begins all over again. Nobody can fully self-isolate.  We need things like gas and groceries.  Those of us that have household members that are also considered essential workers is an added risk.  As first responders, we will never be exposure-free.

Because of this, Director McKenzie is working with our I.T. Dept, Court Security, and our Facilities Dept to split our operations into multiple locations, creating work "pods" that will "further reduce face-to-face contact and further reduce the possibility of disease transmission," per an email dated March 24.

On a personal note, the last five days have felt more like five months.  Information changes daily, there's been an onslaught of calls related to Illinois Governor Pritzker's shelter-in-place order. We're all keeping up a great game face, but tension and anxiety lie just beneath the surface for most.  Adjusting to this new normal will take some time, but we TC's are naturally and beautifully resilient and we will make it through this together and come out the other side better than before - of this I am certain.  Check on each other, and don't forget to check on your leaders as well.  Now more than ever, practice self-care and humor.  Liberally.

If you have any questions, please email me directly at brendhan@humanize911.com.  If appropriate, I will answer them in the form of an update to the blog.  Otherwise I will respond directly.  Please allow time for that to happen.

FINALLY, our coworker and friend appears to be on the other side of this. They are still very weak and recovering, but their body temperature has come back to normal. We're hopeful to have them back at work soon!

Lake County is situated in the northeastern most part of Illinois, it's northern border being Wisconsin, a southern border of Cook County (home to Chicago), and an eastern border of Lake Michigan.  With a population of approximately 704,000, Lake County has a total area of 1,368 square miles - 448 land, and 920 water, the majority of which are from Lake Michigan.

The 9-1-1 Communications Division of the Lake County Sheriff's Office is a 24/7 division employing a total of 27 full-time Telecommunicators across three shifts and three separate schedule rotations.  We are 93% fully staffed, with just two shortages.  John Idleburg is the Sheriff.

Being the Coworker You'd Want to Work With